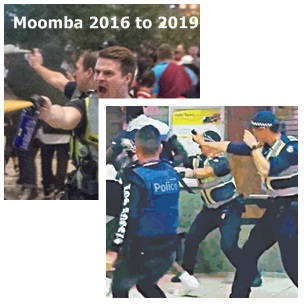 The Editorial of the Herald Sun on the 12th of March 2019 arguing for the implementation of bans to curb the gang violence in the Melbourne CBD during Moomba and other events is laudable but flawed.
Any process involving the judicial system is always post-event so the likelihood of it having an impact is doubtful. Perpetrators having to demonstrate non-compliance for a ban to be imposed seems counterproductive.
This is a Policing issue and the tactics of policing these events need to be reviewed.
Not being there, qualifies our comments but we can nevertheless make observations based on our own experiences.
There were fundamental rules of policing when dealing with unruly or riotous groups. Not limited to but including identifying the leaders and targeting them is a start. All groups have a leader or leaders and as soon as the leader/s breach any law for which there is a power of arrest then execute the arrest. Remove the leaders.
Warnings are only useful if the person warned believes the threat will be carried through so without the likelihood of consequences for disobedience one might as well be, ‘Whistling Dixie’.
Removing the Police ‘move on power’, certainly has not helped and should be reintroduced
Perpetrators are aware of what they are doing and generally do not need to be told. So if a threatened arrest does not happen, they win and police lose ‘street cred’ and their effectiveness is diminished. Hollow threats never work.
There is an old saying in boxing, ‘never telegraph your punches’. That translates into, if you don’t know it is coming you cannot prepare for it. So it is with making an arrest. The element of surprise gives the police in any circumstance the upper hand and reduces the likelihood of injury to police and the perpetrators.
Dancing the tango around miscreants, spraying pepper, making demands to disperse is counterproductive by not being assertive. By the time that an arrest is necessary the perpetrators and their followers are all prepared to make the risk of injury to police and the escalation of violence probable. Noting that Police, as well as perpetrators, are affected by the indiscriminate spray.
A troublemaker is neutralised by one thing, the Prison Van and a trip to the Police Station to be charged and bailed with a condition not to return. If they are dumb enough to return to the fray, immediate arrest for breach of bail followed by the refusal to bail, for the bail breach, will soon discourage noncompliance.
Police numbers would not seem to be the issue and even with the additional numbers at Moomba this year as opposed to last the problems seem not to have diminished therefore Police tactics need urgent review. The dispersal strategy is not working and not making our public places safer, standing toe to toe or dancing with perpetrators magnifies the problem it does not diminish it. Police must be assertive and positive in their approach
Police need to get in and get, ‘their hands dirty’ (arrests) to solve this problem, that is what they are sworn to do.
If they do not we will be having repetition after repetition and somebody will be seriously hurt.