EX-TOP COP TROLLING, NOT SERIOUS ENOUGH TO BE CHARGED 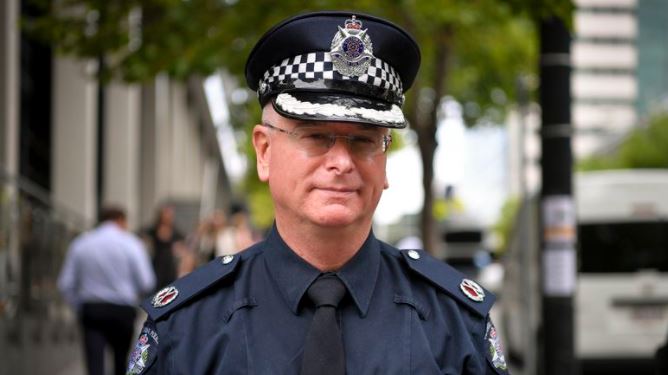 Operation Turon lives up to its name, ‘Sliced bananas or other fruit rolled in a thin layer of pastry and deep-fried, served as a dessert or snack’ an apt description of the outcome of this investigation as far as Guerin is concerned, but leaves the victims wondering, ‘what does somebody have to do to be held to account?’

In his response to the IBAC report, Guerin showed little contrition for his behaviour. Throughout the report, as in his response, the Victims of this despicable behaviour did not receive any acknowledgement, let alone an apology from IBAC or, more pointedly, the Victoria Police.

That no criminal charges were laid is very concerning. At the time of his worst trolling, he was the Assistant Commissioner in charge of the Police Professional Standards Command (PSC) responsible for Police internal investigation. This certainly aggravated the behaviour substantially.

At the very least, a clear-cut breach of

Section 474.17(1) of the Criminal Code 1995 (Cth) (“the Code”), a person commits an offence if they use a carriage service in a way that reasonable persons would regard as being, in all the circumstances, menacing, harassing or offensive. The “service” can include a fixed or mobile telephone service, an internet service, or an intranet service.

Additionally, there would seem to be another clear-cut case of,

Misconduct in Public Office applicable to at least the first reported complaint.

But of gravest concern to the CAA is the apparent lack of application of investigative skills to this Operation that is neither explained nor addressed. And the continued references to Assistant Commissioner Brett Guerin throughout the report is disingenuous.

Guerin lost his title the day he resigned. It is clear he would rather resign than face the humiliation he deserved. He ran to avoid accountability, and he should never have been allowed to retire.

It’s probably more interesting to look at what the investigation did not discover or what was not reported.

Guerin’s behaviour came to official notice when a complaint was lodged with VicPol and referred to IBAC in 2017.

We understand that a complaint was made by a Blogger who had identified the ISP numbers from a number of trolls by the Guerin pseudonym Vernon Demerest.

The blogger had identified one of the numbers as registered to Victoria Police Centre (VPC) and the other to a private address we presume to be Guerin’s.

VicPol, in the referral to IBAC, would indeed have included this information, or did they? Surely competent investigators would have spoken to all complainants and discovered the ISP addresses, if not passed on, or did they?

However, instead of investigating the matter, IBAC referred the case back to VicPol and surprise, surprise, it was referred to the then Assistant Commissioner Guerin, the head of Police Professional Standards (PSC). He could then investigate himself.

A response was sent to the complainant that there are hundreds of computers in VPC, and it would be impossible to identify who uses which computer.

That little gem we would have thought crossed the line into criminality, Misconduct in Public Office by Guerin, but not according to IBAC.

The not insignificant point that all police computers have to be logged on with a user ID escaped the detecting minds of those charged with that responsibility.

That IBAC did not find evidence that Guerin’s trolling and the vile racist, homophobic, etcetera trolls affected his decision making is extraordinary; obviously, they didn’t look too hard.

Reference was made to an incident that severe racially motivated rants at a police station abusing a senior sergeant’s ethnicity was somehow okay because Guerin said that it was. Guerin said it was taken out of context.

Somehow self-serving statements by a perpetrator are acceptable to be reported and relied upon – IBAC was conned.

That incident ended up with a substantial civil settlement to the Senior Sergeant.

Reading the report, other omissions are unbelievable.

There was the matter of a venue operator of ethnic heritage who was publicly shamed and libelled by Guerin on mainstream media. A Court in that case found in favour of the venue operator against the State (Guerin).

CAA is also aware of another settlement where racism was alleged by an applicant before a selection panel where Guerin was the convenor.  Evidence was forwarded to VicPol that showed dishonesty and unprofessionalism by Guerin in the conduct of the selection.  A human rights complaint was made. Again, this resulted in a significant settlement that VicPol had to pay.

So, there we have three non-Anglo’s suffering at the hands of Guerin’s decision making, coincidence? I don’t think so. It is a pattern of demonstrated criminal behaviour obviously ignored by IBAC.

The involvement of the CAA in this matter was that we identified the troll as Guerin. Not IBAC or VicPol.

Pilloried by former Chief Commissioner Graeme Ashton, Guerin, and another former Assistant Commissioner Fryer, the rhetoric espoused by Fryer in relation to the CAA and its Chairman Kel Glare appeared in written form under the name of Brett Guerin on our Facebook page.

The diatribe lasted only a short time before it was deleted when Guerin realised his mistake. Recorded by us before deletion, we were amazed to find another post within minutes with the identical diatribe, but under the name of Vernon Demerest, Guerin had blown it. What an idiot,

We had already advised Demerest that we knew it was a Police member and warned the author that the name would be blocked if the trolling continued.

With Guerin’s absurd behaviour, we delightfully responded to Demerest,’ We know who you are. It is a matter of professional standards. We doubt that Guerin would have been too concerned as he had already dodged the bullet once and would be confident his position would protect him.

This exposure was followed by a series of letters to the Chief Commissioner reporting the extent of the trolling, given that we had contact with a number of victims.

Had the CAA not identified Guerin, the trolling would have doubtless continued

Our correspondence of the 12th of April 2017 fell on conveniently deaf ears. We didn’t even receive acknowledgements, let alone any comfort the matter was being addressed.

With apparent inaction by authorities, working with investigative journalist Cameron Houston of the Age, who in turn Neil Mitchell of 3AW, the Chief Commissioner, was asked about the trolling on air, and his response was to dismiss the matter as trivial. Somebody was getting a bit excited on a keyboard.

Guerin was then exposed and came onto the Mitchell Show to admit his trolling and dismiss it as trivial.

The following day Houston wrote a detailed article exposing the extent and the content of the vile trolling. All the significant media mastheads ran the headline about Guerin’s exposure.

The next day Guerin resigned.

The IBAC investigation looks very ordinary when the facts are disclosed, particularly those omitted in their report.

The other glaring anomaly in the IBAC report is the gloss over of the length of time Guerin was trolling for the better part of a decade.

IBAC expects the people of Victoria to accept that a person can troll for that long, espousing the most vial references without them being what the perpetrator thinks? Does it seem IBAC may be accepting that the Guerin ultra-ego is somehow a different person?

Very convenient for the perpetrator and very concerning that this stuff can perhaps sway our Corruption Watchdog.

The other great anomaly in this investigation is that no real or reported effort was made to track down the other players in this artifice.

We are expected to believe that Guerin did not have other sympathisers, barrackers or willing recipients of his work egging him on. We are not that naive.

It is beyond reasonable belief that others were not identified given IBAC had access to all Guerin’s electronic devices, and each transmission sent or received leaves a footprint. Maybe IBAC investigators need some internet training.

It gives us no comfort at all as we have never discounted a theory of an ultraright wing enclave within VicPol fed by Guerin’s rants.

The reality is there is every chance of a ‘Jedi Council’. It has certainly not been discounted.

We have drawn the obvious conclusion that our so-called Corruption Watchdog is lucky to come up with a whimper, but we note they are pretty good at getting a conviction for pillow talk.

Unfortunately, the IBAC is largely a paper tiger when it comes to matters of substance, such as the ICook Foods, Slug-Gate fiasco