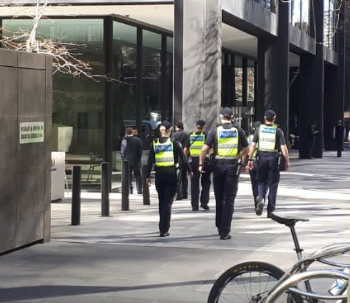 The copper on the beat, the plod on the sod, and there are other parochial titles for the Police on the beat, many of them derisive.

Seen as a quaint hangover of the 19th century this Policing practise is more relevant to today than it is given credit when generally the community is more electronically connected than physically, and the lure of a nice comfortable air-conditioned office or Police car is too tempting and allows Police to avoid their proper function.

The foundation of all good policing is interacting with the community and preventing crime and disorder.

It is, however, not all bad news, there is evidence that Victoria Police are starting to introduce more foot patrolling. It is probable that they have been at it for a while, but it is now clearly more evident, and that is a good thing.

The sad thing is the art of the foot patrol seems to have diminished over time, and the practice of sending out a patrol, of sometimes up to five members is akin to a military, rather than a police operation.

Yes, they achieve a highly visible presence, as do traditional police foot patrols, but there is more to a police patrol than just being a presence. There needs to be interaction with the community, not just the people that the patrol identifies as possibly requiring their attention but the broader public. The presence of a large patrol creates an impregnable front that is counterproductive to good community interaction.

Paradoxically the high concentration of Police provides a security risk for the police, packaging them up into a nice tight bundle. The art of policing safety is ‘Situational Awareness’, and that is the most effective defence to the danger of policing.

A group of police walking down the street engaged with each other verbally or non-verbally diminishes situational awareness and increases their personal risk.

The preoccupation with the absolute opposition to Police working by themselves is counter-intuitive to their safety.

We do not advocate to increase the risk to Police but the opposite.

If the resources of Victoria Police allow for patrols of the size pictured, then either follow the military practises of patrols, detail a forward scout and a tail-end Charlie, or revert to police patrols.

We presume that the patrol of five would be led by a Sergeant, the members deserve that support, and that Sergeant should deploy and manage his people through the area to be patrolled all within a safe distance of each other should help be required. The technology available to patrolling Police and their supervisor will ensure their safety.

Rather than decisions on deployment being made at a higher authority, the deployment of the patrol should be at the discretion of the Sergeant.

We are yet to see any patrols in the suburbs of note, but as the realisation occurs that proactive Policing is valid, so the patrols will increase as senior management evolves and they start to move from their current city-centric policing model.

Of course, putting in place patrols where there has been, a problem is reactive policing, or prevention after the occurrence, but genuine proactive foot patrols can form the cornerstone of a competent, dynamic statewide police force.

After all, the vast majority of the city’s problems are born in the suburbs.