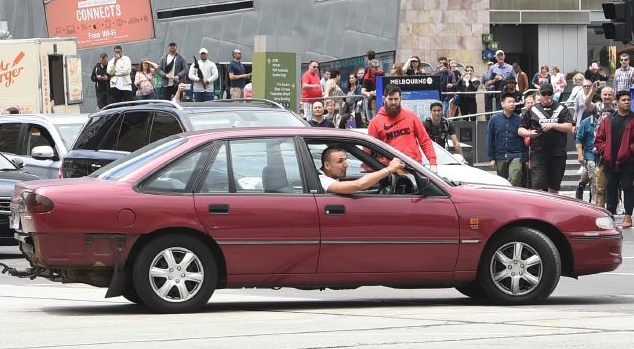 The new Hostile Vehicle policy recently announced by Victoria Police allegedly clarifies the difficulty police face in trying to make accurate assessments of when to escalate a Police response.

– it will turn to sludge when the heat is applied.

The major flaw is that it is, “Police Policy,” not legislation, so a police member could follow this policy or instruction, and still be charged with serious crimes by the Independent Broad-based Anti-corruption Commission (IBAC), even if VicPol finds that action complied with this policy.

Additionally, this policy does nothing to protect the police member from civil litigation. It may be the State that is sued, but the emotional damage to the member cannot be underrated.

The Hostile Vehicle Policy describes the circumstances that might see a vehicle subject to this policy, but the descriptors are so broad and underdefined the onus again falls to the police member confronted with the incident, nothing changes.

Instilling ambiguity discourages members from acting decisively, the opposite of what we want from them.

A police member cannot definitively hope to determine what the threat is of a driver/perpetrator by location and driving, usually until it is too late. Therefore, a definitive set of rules must be developed so police can act with the confidence that their decision will not be second-guessed.

To give police, and us (the public), half a chance, legislation as an amendment to the Police Act should at the very least determine a Hostile Vehicle as; ‘A vehicle that is driven in a manner to avoid interception or fail to respond to the overt demands by police to stop. As the perpetrator escalates avoidance, so should the application of force.’

The perpetrator may or may not have intentions of mass murder, but avoiding interception can be just as dangerous to the public, whatever the motivation. Decisive actions will be an outstanding deterrent leading to fewer incidents.

This policy, however, may help the police executive, seen to be doing something, but the risks to the police members on the street does not diminish one little bit.

This policy leaves it to a police executive to make a subjective call after the event as to whether the policy was complied with, the problem that already exists.

We are astonished that the Police Association has not opposed this policy, seeking legislative protection for its members.

Currently, the Association is focused on an Enterprise Bargaining Agreement seeking amongst other things a four percent pay rise. We would argue that reducing the likelihood of members losing their job is a higher priority. While this nominal rise is well justified, we suspect many members would like to know that their employment is protected by legislation to perform their duties first and their pay increase second. A matter of economics.

At this time, the question that must be put; had these guidelines been in place earlier, would the outcome of the Bourke Street massacre have been different?

We would argue, probably not. It was not the pursuit policy or lack thereof; it was a culture that has been infused into the organisation where the spectre of ever-present repercussions and poor leadership negatively influences front line police actions.

This new policy offers no additional protection for members than existed at the time of the massacre; therefore, it is unlikely to encourage police to expose themselves to more danger, to protect us.

It is time for decisive legislative action.

The success of the Nuremberg defence,” I was just following (the hostile vehicle policy) orders”, was problematic for many Nazi war criminals executed after the Nuremberg Trials.

Although the execution of police members may be metaphoric, the reality exists, and to expect our police to protect us without protecting them against sanctions is a travesty.

The Community Advocacy Alliance (CAA) has long advocated for the use of technology that if it had been implemented, would have avoided the Bourke Street massacre, and removed the danger of many other incidents involving vehicles but the Government and Victoria Police ignore the advice.

The CAA initiative would increase the police capability, dramatically reduce demands on resources and increase the ability to save lives substantially, beyond criminality and save the Government millions in settlements.

An interesting conundrum now appears. Should this policy be retrospective?

We only have access to media reports, but it would appear, there are cases where police members disciplined or are before the courts, that had this Policy applied to their situation, their actions would have complied?

In the interests of justice, the Chief Commissioner must immediately implement an audit of all matters currently before the courts and or subject to disciplinary procedures and where, in any case, a member under this new policy would not be proceeded against, withdraw the matter immediately.

If the Chief Commissioner does not undertake the audit, the Police Association must, to protect its members.