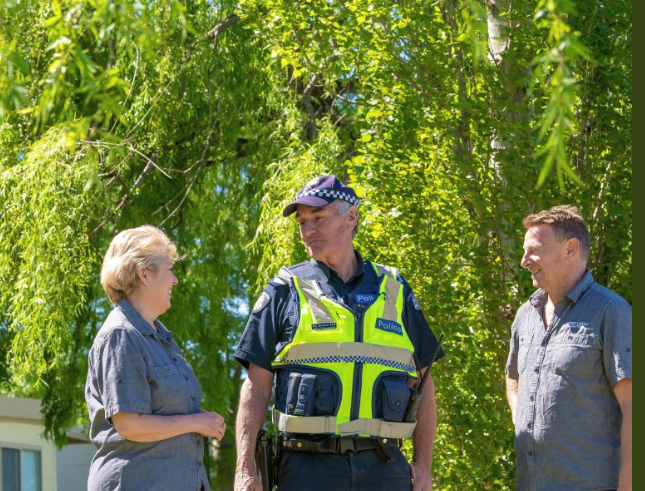 The shocking statistics of our Police in this State being assaulted needs deeper public examination.  This is because it is the start of a breakdown of Law and Order and a direct threat to our democracy and our freedom. The public and the Police need to jointly address this serious problem before it deteriorates further.

Former Victoria Police Chief Commissioner Ken Lay was once quoted as saying, when referencing  the Drug problem,” You cannot arrest your way out of this.” He was absolutely right, but here we have another serious issue that it would appear is being addressed by technology, legislation and the weight of the law when Ken Lay’s words apply to this issue equally.

We are doing a range of things to try to reduce the injuries to police, not only better training but also things like our body-worn cameras that we are rolling out to Police.

It all sounds like good stuff but the omissions are the standouts. Policing is, and always will be, a ‘people business’, so this is the level at which this problem must be addressed. A cultural change has occurred and needs to be adjusted for the benefit of all, not just Police.

Respect is something that you earn and always has been, and it is not something you can direct others to apply or delegate responsibility for, as that is an abrogation.

In New South Wales the assault rate on Police is an unacceptable 2500 per year but here in Victoria the assault rate is 3000, that is a significantly higher figure meaning 500 more Police are attacked here than over the border.

To emphasise the disparity with New South Wales:

The differential may have something to do with the level of respect for Police across the border; each Police Officer in NSW police an additional 100 people compared to their Victorian counterparts and experience 17% less violence.

This trend must be viewed as a breakdown of Law and Order in this State.

When Police lose respect, they lose authority.  Because the Police are the ‘Front Line’ in protecting the community and there is evidence that this ‘Line’ is breaking down. We now see examples of other people in authority behind the line also being assaulted and abused.

It is not unreasonable to conclude this break down has become cultural so unfortunately, the plea from the Chief Commissioner is not likely to cut through to those that it needs it to.

It also has to be said, that merely pleading with the community and introducing more technology and harsher penalties will achieve little.

The solution is probably to bitter a pill to swallow for the Police executive, but it is, in the CAA’s view, the only one that will work.

Respect for the Uniform starts with the uniform being well presented. Police are turning out for duty in a scruffy, unkempt uniform with boots that are scuffed and hair that is often unruly.

This projects an image of lack of care, pride and respect for the uniform by the wearer. If Police themselves do not publicly display respect and pride in their uniform, the public certainly will not.

With all the construction work currently happening, it is not hard to notice the Hi-Viz brigade and often they are better turned out than Police, they obviously have pride.

The construction workers also wear their safety hats often in circumstances where the risk is, or need for head protection is not evident, but they present an authority. To see a Police member wearing a hat is now a novelty and only appears to be enforced in demonstrations and inner-city Policing.

The Police hat, as with the wigs and gowns as worn by the Judiciary, are symbols of authority and public confidence.  They project that authority and create anonymity of the wearer who is performing that authoritative roll on behalf of the community, not themselves.

We are not referring to baseball caps, that have their place, but Police hats and management at all levels must set the example.  When the Chief Commissioner conducts a press conference, he should wear his hat.  He should also wear a tie and tunic.  Turning up looking like he is on his way to a barbeque sends a subtle message that he, too, has little pride in his uniform.

It is not uncommon to see Police directing traffic with a Hi-Viz vest indistinguishable from any other workers encountered on the roads, save that Police, invariably do not have a hat on, where construction workers usually do.

Community engagement is an area that has largely evaporated. We rarely see Police actively patrolling the Highways, a police foot patrol in a strip shopping centre does not happen and the major retail hubs would experience crowd control issues if the oddity of Police patrolling were to occur.

The public is well aware of the oxymoron of Police patrols where the ‘observer’ is regularly seen with head down exercising their communicating thumbs rather than observing. Police cars are always going somewhere and not patrolling.

We acknowledge this in part, is a resourcing issue; but it is also a management issue.  The challenge is for the Police executive to achieve change, but a cultural adjustment in policing is essential.

We occasionally see a Police vehicle visit a local sporting event, but only ever for a quick drive through. Police do not exit the vehicle and engage with the community. Saying “G’day” to a group of football supporters or just asking the score would do more for community engagement and restoration of respect than any plaintive plea from community leaders.

A trip to Parliament house is enlightening. The PSO Officers on duty are generally better presented than what we see Police in the suburbs, but you can walk past them a hundred times without connection. If a member of the public says, “G’day”, they are responsive and pleasant, but the PSOs never seems to initiate such interactions.

The need is for Police and the public to start communicating at this basic level if there is any hope of reversing the trend. This problem of lack of respect is mutually inclusive and requires all parties to make a genuine contribution.

Rather than the current approach, a “G’day”, campaign, could produce significant results, but the Police must provide the leadership in order to get public buy-in

Police in every suitable situation should instigate a greeting. It could be “Good morning” or similar salutation the member is comfortable with, accompanied by a friendly smile. Police must, however, take the lead.  Add in a marketing campaign and we will all quickly see the community become engaged with its police once again.

How pleasant it would be to experience a Police member greeting you on the way past.

If you have ever travelled to Fiji, the local greeting of “Bulla” delivered effusively by locals, with a smile, is infectious and immediately creates an impression they are nice people. We are not advocating moving to that degree, but the example is relevant.

There are plenty of times that Policing interaction is not pleasant, but perpetrators who have had a personable communication with a member of the Police Force are less likely to be aggressively disposed towards them.