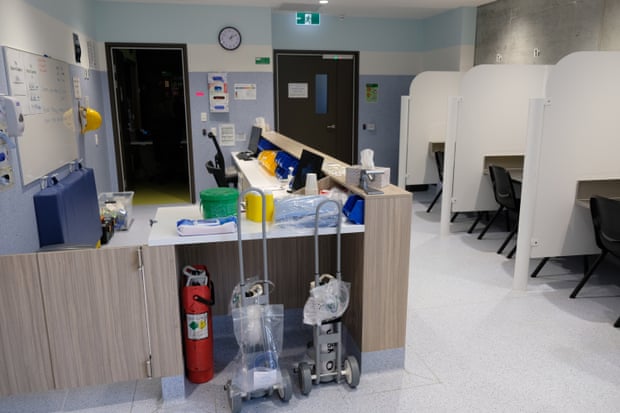 “The basic argument for the Flinders St site for the new safe injecting room boils down to one simple reason: the Flinders/Elizabeth St area is a heroin hotspot. But setting public policy on heroin availability and simply bending to the convenience of a transient drug culture, and the criminal trafficking and petty crime that fuels it, is not the answer”.

The unconscionable cruelty to addicts to placate to the addiction that has trapped them rather than cure it, and the absolute ignominy towards serving and former Police who regularly put their life on the line protecting society when dealing with the vicious criminal elements responsible for this insidious illegal trade. Not to mention the various Health professionals exposed regularly to danger.

Our only argument with the Herald Sun Editorial is its reference to ‘petty crime that fuels it‘. A lot of the crime involved is not petty, but rather serious crime, often very violent.

Making the whole argument about Shooting Galleries more enigmatic is that a former Police Chief Commissioner heads up the group looking to expand the shooting gallery concept.

We know the former Chief Commissioner, Ken Lay, once said, “You cannot arrest your way of the problem”. There is no argument that is sage advice; however, to completely capitulate, which establishing a shooting gallery does, is very disappointing, you would have thought he would know better.

The public debate about the Shooting Gallery in Richmond and the proposed additional Gallery in the CBD has been focused on the loss of amenity to others. Those concerns are totally reasonable and must be respected. However, the real problem the illicit drugs and the facilitation of access to illicit drugs by addicts, and more importantly, the associated criminality that funds the trade, has been generally overlooked.

The latest research is proposed to be published in the American Journal of Preventative Medicine. If the ‘The Age’ reports are any guide, the research and conclusions drawn are problematic at best and the necessary peer review to publish should find this research unconvincing.

To conclude, from the Burnet research that the much-derided ‘honey pot effect’ is debunked, is a flaw in point.

Their research claims almost half, 41.7% of the respondents that use the Richmond facility live no more than two suburbs away. With only 12% of Richmond addicts using the facility. At 213 persons a day on average using the facility, only 25 come from Richmond. Therefore, the claims of a ‘Honey Pot’ effect are correct.

The shooting galleries attract users from all over, and with them, there is a trail of pushes following along to access the market concentration so conveniently established by the Government.

That shows irrefutably that a facility (if we must have one) in a surrounding suburb to the CBD will be equally effective. The Burnet figures clearly support that hypothesis.

Examining crime figures for Richmond alone serves no purpose with most addicts coming from other areas.  Addicts tend to commit crimes closer to home.

The scientific collection of discarded needles on consecutive days and Forensic analysis of discarded syringes near the Richmond facility will provide substantial empirical data as opposed to guesswork that most analysis currently is. A scientific approach may indicate whether there are different suppliers being used by addicts, the frequency and the type of drugs. If DNA can be extracted there will be a wealth of other useful information to clinicians and law enforcement.

Another problem conveniently overlooked is the danger on our roads of people shooting up then driving. Are there any safeguards for the community for this complication?

However, one would assume that is less of a problem in the CBD as access by cars is limited, but that means there is a strong probability a high percentage of users will access the facility by public transport and anti-social behaviour by drug-addled users on public transport will be a serious problem. The community forced to travel with drugged up individuals is not only very scary but also very dangerous due to their unpredictable behaviour. Passengers without the ability to withdraw from their presence, being locked in a train carriage with somebody on Ice, ‘off their face’, injected at the Gallery could end up catastrophic.

If a citizen is impacted by an imbecile under the influence of drugs administered in a Government facility, would they have recourse against the State who sanctioned it?

That the Richmond Gallery has saved over 20 lives is pure speculation by the Burnet Institute, the same institute that’s modelling on COID is wildly inaccurate. What is also very significant is that the reduction in Ambulance responses have dropped so marginally as not to be included in the statistics. Emergency Departments (Eds) also cannot identify any change in admissions, according to the Burnet paper as reported.

This dispels another of the justifications for a Gallery, that our Ambulances and Ed’s would be saved from the curse of addicts flooding their resources. Our Ambulances and Ed’s have not had any reprieve, so that rationale, along with the claimed absence of the ‘Honey Pot’ effect and predicted crime trends have been debunked.

If we need the facility (despite the fact that it condones crime), and we have our doubts, then locate it away from where our kids might frequent, or where the general public is forced to be exposed to the peripheral activities associated with these facilities. Using high-profile locations is wonderful marketing for the illicit drug tsars having their trade given a high profile.

We only hear of the alleged lives saved from overdoses. Still, we cannot locate any empirical data on how many addicts have been saved from their addiction, given their life back, hence the sound argument that the whole concept of a Shooting Gallery is to facilitate use, not reduce it.

With the State in the middle of a health, pandemic we wonder whether illicit drug addicts are regularly COVID tested and inoculated as they come into contact with health services. We do not fancy the chances of our contact tracing being effective with this cohort if the infection enters the illicit drug sphere.

The CAA has proposed an alternative https://caainc.org.au/legalise-drugs-careful-what-you-wish-for/ that addresses all the issues omitted by the current strategy, and until somebody starts to think ‘outside the box’, the drug problem will continue to escalate.