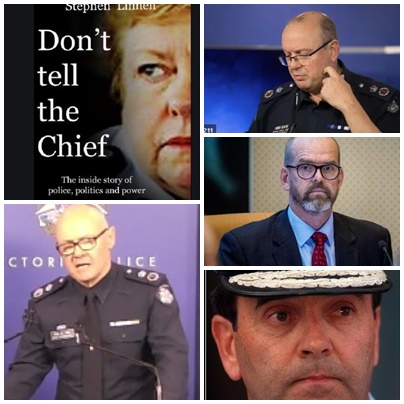 How many fails before the mechanism for the selection of Victoria Police Chief Commissioners is replaced with one that works.

Over the last twenty years, there have been five appointments of Chief Commissioners of the Victoria Police.  It is fair to say that the process of selection has been fatally flawed in the overwhelming majority of appointments.

How were the appointments of Chief Commissioners to the Victoria Police made?  What was the process that failed so dramatically and regularly?

The fiasco around the Ash Wednesday Bush Fires, the injustice done to Sir Ken Jones when he tried to highlight issues adversely affecting the Victoria Police, the highest ever crime rates, unacceptable street violence, drugs rampant, an unacceptable road toll and the current Royal Commission into the police use of informants is stark evidence that the appointment process has been utterly inadequate.  Why was this so?

Clearly, whoever was responsible, Victoria has suffered and is still suffering from a lack of effective leadership.  The members on the ground deserve leaders that they have confidence in and can trust.  The community also deserve to have the Police led by people who understand community policing and who put service to the public, particularly through crime prevention, first and foremost.

Victoria does not just need a leader who can manage a Police Service, but one who can repair the damage wrought and then lead the Force. It is essential that person be found. A fail in this process will ensure the Government of the day will subsequently rue that failure, and pay a very high price.

Please get the process right.