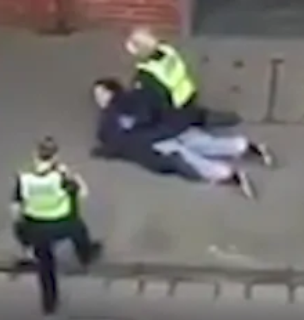 The magnitude of the challenge faced by our new Chief Commissioner to build a cohesive and effective Police service for Victoria was highlighted in recent events, none more so, than the arrest of a female in Collingwood for not wearing her mask.

The following day it was claimed she only gave Police the finger, but the video shows the Covidiot apparently striking out.

We pass no comment on the mask issue as Police did not make this rule, they are, however, required to enforce it.

The perpetrator admitted not supplying her name and address, and the video shows resistance so no issue with the arrest.

The only issue we saw was the inordinate amount of time it took to effect the arrest given available resources.

What we saw on that video was grossly disturbing.

It was the unconscionable actions of the member’s partner who barely made any attempt to assist him in the arrest and for the initial period was not even within a distance that could have been useful.

That the member’s partner appeared happy to stand back and not assist their partner with a person resisting arrest, is unforgivable and a dereliction of duty.

The member did appear to use the radio; however, the member should be reminded that Radios do not effect an arrest. But it can be a foil to avoid confrontation. Location and problem are all that is required, and the radio operator does not need a blow by blow commentary.

Moreover, if the partner had done their job, there would be no need for back up.

The member’s partner did move in very belatedly in a less than convincing way, and because of this hesitant approach was kicked. If the partner had been decisive and assisted properly, the perpetrator would not have had the chance to kick.

If Police are required to effect an arrest, it must be done decisively and efficiently trying to avoid getting into a prolonged wrestling match as that is more likely to end up with injuries to Police and the suspect.

The legality and the efficacy of the arrest is a matter for the legal system, not the footpath.

We note that the matter has been referred to Ethical Standards for investigation and that is a good thing.

That investigation can focus on the non-performance of the other member’s present causing the arrest to play out much longer than needed, with the heightened chances of both the prisoner and the police member being injured.