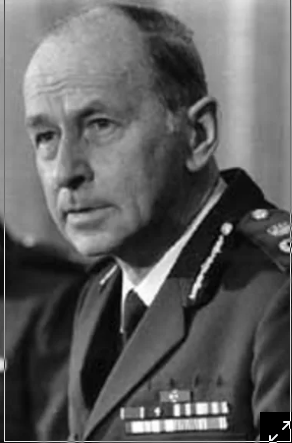 On the eve of the funeral of the most respected Chief Commissioner in the history of Victoria Police, S.I. “Mick” Miller, it would be helpful to reflect what we can learn from his ten years as Chief Commissioner and his service so that we do not fulfil the above quote.

Mick Miller knew how to catch crooks and ensured members of Victoria Police were trained to do likewise. He developed the Bureau of Criminal Intelligence which went around Australia and resulted in the Australian Bureau of Criminal Intelligence. He instigated the creation of the Special Operations Group to address the threat of terrorism and highly dangerous criminals.

He also ensured leaders were trained to do just that, lead, so much so that those who progressed through the ranks under his tutelage went on to become Commissioners of police forces in Western Australia, South Australia, Tasmania and Queensland.

He was a strong supporter of recognising and empowering the voice of victims and appreciated to gain change you needed the right messenger, that messenger was V.O.C.A.L., Victims of Crime Assistance League, led by Howard Brattan. This led to Victims being given a voice through legislation in Victoria and throughout Australia.

He also fulfilled his oath of office to do everything in his power to prevent offences. He did this by empowering every citizen to contribute through Neighbour Hood Watch and also supported innovation from police at the coal face, bottom up not just top down, to prevent youth crime, which led to Blue Light Discos being developed through Victoria, followed by other states and to other countries.

He understood the importance of breaking down barriers between operational police and young people. He ensured police officers had time to attend Blue Light Discos on duty and that at each selection panel each candidate was asked what has your involvement been in Blue Light Discos.

He changed the culture of many in policing and saw prevention as the role of police and that police had a leadership role to play in prevention. Other programs developed through his leadership, being Protective Behaviours taught to primary school students and the Safety House program. His influence continued through the next two Chief Commissioners, Kel Glare, who continued to professionalise policing with the introduction of Police Prosecutor training and prevention through the introduction of the Police Schools Involvement Program and Police and Community Consultative Committees leading to Neil Comrie’s further development with the introduction of Local Priority Policing, again empowering communities to be involved making their communities safer. This was a period of engaging with the community and putting into practise one of the founding principles of policing developed by Sir Robert Peel and the first Commissioners of the Metropolitan Police in London in 1829 that police are the public and the public are the police.

From then on engagement with the community and youth and prevention began to disintegrate from being a core function of Victoria Police Command, although it did continue at the coal face. Victoria Police Command withdrew resources and support from the Police Schools Involvement Program, High Ropes, Blue Light, Neighbourhood Watch and Operation Newstart as well as a raft of local initiatives. This has contributed to spiralling youth crime. It has also removed opportunities to prevent youth being involved in other high risk taking behaviour, as we have again tragically seen today, of youth getting into cars and then being killed and seriously injured by reckless drivers.

Vale Mick Miller, let his legacy be the catalyst for change in police leadership in Victoria and make a lie of “We learn from history that we learn nothing from history”.