Who let Miller and Silk down? 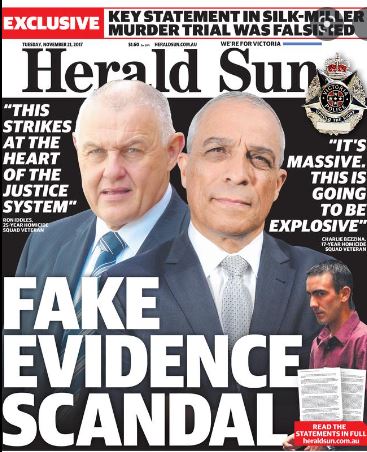 The acquittal of Jason Roberts for the murders of Senior Constable Rodney Miller and Sergeant Garry Silk in 1998 is disappointing, but the part that rips at our guts is that the acquittal was achieved because it would seem, the ineptitude of investigators, not much else.

How could such an important, or for that matter, any case be subjected to the errors that this brief contained?

We suspect some will be held to account, but the real culprits, senior management, will not be tarred with that brush; low-hanging fruit will be the scapegoats.

Tampering with evidence is an absolute no, in any circumstances, and irrespective of the crime, there is never a justification.

It would seem the necessary elements of Perverting the Course of Justice exist in this matter. A Common Law offence with a codified maximum penalty of twenty-five years in the Crimes Act, indicates the seriousness of how this type of behaviour is viewed.

Every detective and police member knows this. So fundamental and absolute is this rule and the consequences, that denial of its existence by any police member is indefensible.

Additionally, those same police, are well aware of the process should a witness, due to circumstances, wish to change their statement. That is not an offence, but there are procedures to follow.

It would be helpful if the Chief were to condemn the tampering of evidence publicly to attempt to regain some credibility for the Force with a public apology to the State and the families of the two members who paid the ultimate sacrifice.

The families of the slain members, serving and former police, having to carry the ignominy of the failures of the Victoria Police is beyond reprehensible.

There is palpable anger over the incompetence in this case.

The old saying, we all bleed blue, is a truism in this case, with the vast majority of serving and former police sharing the pain with the slain members’ families.

If policing cannot get it right when their own are slain, what hope for the rest of the community?

The handling of this case has severely damaged community confidence in the Victoria Police as an Organisation already reeling from a number of missteps in recent years. This latest just made policing just that much harder.

Some of us in our early careers were exposed to old-timers who saw the end justifies the means as legitimate Policing. For many of us, that was an uncomfortable concept, but it now appears evident that this outdated and wrong culture has crept back into policing in Victoria.

That can only happen if management is inept.

We strongly suspect this was bought in predominately by external senior appointments and was able to take hold because of bad management practices, also imported.

It is in this environment that spawned a flawed culture that these issues occurred.

It is hoped lessons have been learnt and lateral entry to senior roles is never contemplated again. We hope that our community leaders cannot be that dumb not to learn from the litany of errors foisted upon us by imports.

The problem has evolved over the last couple of decades, where any action to achieve a conviction is acceptable. This flies directly in the face of the principles of good investigations.

Moreover, in part, it puts policing above the law.

A notion rejected by the overwhelming majority of serving police and those who have served.

To blame a few rogue detectives is a nonsense; this concept is a cultural one that senior managers have not addressed, and it is they who are responsible.

A Royal Commission is now being touted as justified because of the failure and ineptitude of Policing in Victoria as an organisation.

There have been a plethora of incidents over recent years that are building pressure for action to be taken.

VicPol has not challenged this growing body of justification for an inquiry, so we can only assume that the police executives are resigned to the inevitability of a review of some type.

A Royal Commission, however, in our view, is not the answer as the answer lies within VicPol itself.

Nothing will change until one or more Senior Executives are held to account and suffer the consequence of their ineptitude.

It is incredulous that some of those involved in the Gobbo debacle still hold senior positions in VicPol, and elsewhere, enabling their incompetence, or more disastrous their policing values, to be further promulgated.

This raises the question of what some inept, incompetent managers must do to be held to account.

It seems whatever they like, it just won’t happen.

The reality is that many who have acted corruptly in the Gobbo matters will have retired and accessed their comfortable Superannuation by the time charges are made. Culprits will not face court as police, effectively shifting the responsibility from VicPol.

Draining the executive swamp is one alternative, but fortunately or unfortunately, depending on your perspective, there are a number of executives whose services are of considerable value.

The ball, however, is now squarely in the Chief Commissioner’s court.

His response will determine whether the Government is forced by public pressure to hold an inquiry or Commission.

There is a growing air of inevitability.