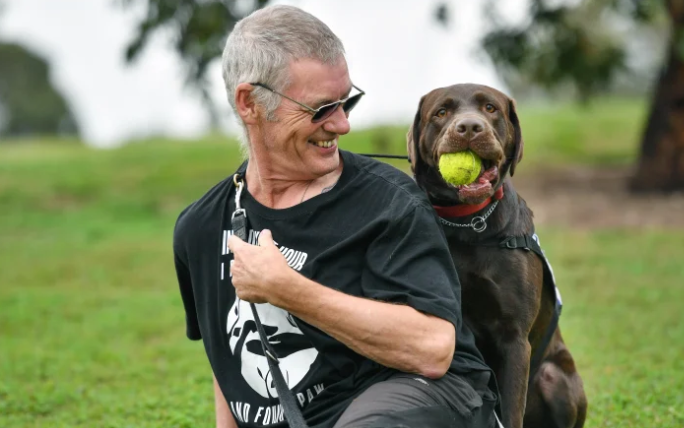 It is not too often that a really good news story comes along that can have a huge positive and perhaps life-saving impact on others. In this case, first responders who gain the magical assistance of a trained PTSD dog, and those considering it. The outcome of this story, Yogi’s Law, has impact Australia wide.

The fight taken on by former Policeman Sergeant Ron Fenton, given Ron’s health issues, is a true story of courage and gritty selfless determination made more so because the financial impact did not affect Ron, but the principle and impact on fellow travellers on similar journeys will be monumental.

The fight centred on this four-legged guardian angel Yogi.

To fully understand the significance of this fight, you need to understand what bought Ron to this place and the role that Yogi now plays, written by John Sylvester in the Melbourne Age.

Knowing Ron (and Yogi) is a privilege beyond measure because knowing him and reflecting on his courage will snap anybody out of any negative inward retrospection.

In my book, Ron Fenton is a true hero.

The story of his latest battles is best told in his own words.

Around three years ago I decided to stir up the possums (how out of character), and submit a claim to Gallagher Bassett, VicPol’s Work cover Insurer, acting as an Agent of WorkSafe Vic.

The claim was to have Yogi, my PTSD Assistance Dog regarded as a ‘Medical and Like’ Expense, and therefore to have the Insurer pay Yogi’s Vet and food costs. I claimed ‘Up to $2,000pa’, such figure per estimates from Assistance Dogs Australia.

At the personal conference, I had with my Case Manager and her Supervisor, it was all smiles and nods, and total verbal agreement that my claim was justified. Three weeks later, AusPost delivered the standard ‘Rejection of Claim’ letter.

Numerous calls and emails only got me as far as, “The decision was made by WorkSafe.” Then began the merry hunt for answers, which only resolved in, “We’ve examined the case in accordance with the Act, and our decision is made.

Left with no alternative, off we trot to the Accident Compensation Conciliation Service (ACCS). And this is where Paul Sambell comes into the fray as a guide and mentor (he doesn’t give legal advice), and helped me tremendously, even initially setting up this Support Group.

At ACCS we discover that…. (now it gets messy here….. WorkSafe based their decision on the current Department of Veterans Affairs Ruling, which in turn was based on an American STUDY. However, the findings of the study itself was currently under critical review. The study had concluded that “There is no empirical evidence to support that Companion Dogs provide any therapeutic benefit to the treatment of PTSD. And yes, I know, Yogi is an Assistance Dog, not a Companion. Just another word-game by DVA.

Neither Party would budge, so I was awarded a Certificate of Genuine Dispute which then allowed me to take legal action.

In the meantime, the Review of the American Study upon which DVA based its Ruling was produced, finding overwhelmingly in favour of Assistance Dogs as beneficial to treatment. At that stage, DVA decided to conduct its own four-year Study into Assistance Dogs, because now it needed Australian data.

All around, however, Assistance Dogs were appearing. Vic Ambulance had ‘Bruce’ and his team; dogs were consoling victims in Court. DVA saw the writing on the wall, and late last year created an Entitlement for Defence Veterans with PTSD to receive an annual amount to feed and care for their Assistance Dog. As such, WorkSafe’s last line of avoidance melted in the snow.
Later on, I instructed Counsel to institute proceedings against WorkSafe. Suddenly this report, and that report, and this examination are required, but I’m not surprised by the delays. Pretty predictable, I guess.

Then ironically, January comes along with Medical news that curtails all delay tactics and places the Court under the moral obligation to hear the matter promptly. As such, we were listed for a Special Hearing today, May 12.

Imagine my surprise when I get woken by my Barrister Fiona Ryan by phone yesterday morning. She’s at the Pre-hearing Conference between barristers for both sides. WorkSafe have walked in with a prepared offer. A set cash amount as recompense for past expenditure, nothing going forward, closure of the claim, and a Non-Disclosure Agreement (NDA).

Our response was that this, and any further offer that included an NDA would be automatically rejected, as would any offer that provided anything less than parity with the DVA Award of $560per quarter.

The rest of the day was spent negotiating back and forth, with me sticking to the same basics. With my Super at my call, and my Medical diagnosis, I made it clear that I had the funds to fight, and nothing to lose. Did they dare take a sick man before a jury because they wouldn’t pay for the upkeep of his Assistance Dog?

The answer is a resounding NO.

We won the case, and now WorkSafe must reimburse me all reasonable costs of the care and upkeep of Yogi from the day I brought him home until now, and ongoing whilst he continues to be able to perform such functions. And thereafter, should Yogi be unable to fulfil those functions due to death or injury, WorkSafe will pay such reasonable costs for the care and upkeep of a replacement dog, providing such dog comes from an Accredited PTSD Assistance Dog Provider.

It’s a deal better than the DVA Entitlement, and one which every First Responder who works for an organisation using WorkSafe Vic Agents like EML, MetLife, etc, AND has an accepted work-related PTSD Claim, AND has an Assistance Dog supplied by an Accredited PTSD Assistance Dog Provider can claim.

It’s been before the Court; it is now Precedent Case Law  – Yogi’s Law

Enjoy. Its been a long battle.