IS IBAC FIT FOR PURPOSE? 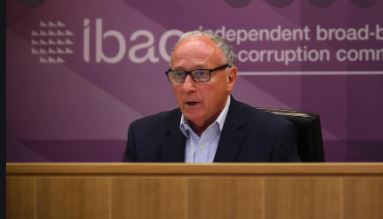 Robert Redlich, please cut it out; you are embarrassing yourself and IBAC.

The IBAC Commissioner has recently taken to the media to argue a case for increased powers and funding for IBAC, inferring that the lack of these is the cause of their failures. They may well be contributors, but, just as with many other Government Officials, the mantra of ‘it’s not my/our fault’ is commonplace and the go-to defence to explain their failures.

When our integrity regulator will not take responsibility for maintaining the bar for integrity, it is little wonder nobody in Government will either.

That may well be the primary cause of IBAC’s failure.

Redlich’s media comments seemed like a thinly veiled crack at the Premier. We would remind the Commissioner that he did have the Premier in his’ cross hairs’, but he and the Ombudsman lifted the barrel as the shot was fired.

Being “Immersed” in the ‘Red Shirts’ artifice was the justification for no adverse finding against the Premier, and, with that, a new definition of the word was spawned.

If your Webster’s is not working for you, try your Funk and Wagnall.

It is time for you, Mr Redlich, and your Deputy to demonstrate true integrity and resign by example.

Things have not been too flash for you both in recent times.

Victoria’s Parliamentary Integrity and Oversight Committee released its report on the 6th of October 2022 relating to Public Examinations by IBAC. It can be argued that the report is a very significant slap down for Commissioner Redlich and Deputy Commissioner Wolf.

Both have sought to increase the frequency and availability of Public Examinations,’ Show Trials’, but they could not explain ‘unreasonable damage’, a concept central to the current justification for IBAC to conduct a public examination. A notion the average person would have no problem explaining.

“This is concerning to the (Parliamentary) Committee, particularly considering that Commissioner Redlich and Deputy Commissioner Wolf were unable to provide a clear explanation in the public hearing of the concept of ‘unreasonable damage’ and how IBAC determines what is ‘unreasonable’,” – Herald Sun-6/10/22

With this finding, the Committee has nailed the major anomaly in our integrity processes: Bureaucrats with unfettered power and no accountability to the principles of justice.

There could be an argument that it is the Parliament’s responsibility to set out what ‘unreasonable damage’ might mean by way of a definition. Still, IBAC has been applying a definition (or is supposed to have been) to all public examinations to date. Hence, it is totally reasonable for the Committee to ask what their definition might be and be critical because they cannot explain something they have been supposed to be regularly doing.

This also reflects equally poorly on the Victorian Inspectorate, which oversees IBAC and is not performing its task well either.

While Redlich and Wolf seek to gain more power, the Committee is wise enough to halt their power grab.

The CAA strongly believes that Public Examinations are abhorrent and should only be used in the rarest of circumstances, and should never be used to replace competent investigative skills and processes.

The CAA is not challenging the Coercive Powers already available to IBAC, just the ‘show’ part.

The Committee has sent IBAC to the naughty corner to do some homework.

“The committee, which currently has a majority of Labor MPs, recommended legislative changes that require the watchdog to draw up new guidelines clearly spelling out how to decide when this damage is unfair to the person being interviewed.” – Herald Sun -6/10/22

This is a bit like getting the fox to design the security for a hen house, risking devious accesses being installed in the design.

There is, however, a relatively straightforward solution to this issue.

IBAC or any other agencies with these powers should be required to apply to a Court for an Order to examine a witness publicly.

Hearings would allow the witness to challenge the Integrity Body to justify its application.

Remove the power from the Bureaucrats who, by the Committee’s findings, do not understand a fundamental principle like “unreasonable damage”, something one would not even need a Law Degree to understand.

Without being legislated, it should be possible for the bureaucrats, who in this case are both lawyers, to understand the concept of ‘unreasonable’.

However, as they cannot or will not, the Courts must determine the answer for each case; simply legislating a definition will not work, as what may be unreasonable in one case may not be in another.

The Courts can place any restrictions on the examination that it sees serves the best interest of the Law and maintains natural justice for the witness.

We argue that the Public Examination ‘Show Trial’ process is used as punishment or more damming, where poor investigations fail.

Moreover, the chance of a fair trial may well be compromised by public examination where the rules of evidence vary from what a court will permit in a subsequent trial, influencing potential jurors; a risk we should not countenance.

The transparency argument often put forward is also flawed as the logical corollary would be for people before being charged with murder, or other crimes should be publicly examined – an illogical and unacceptable proposition.

There is an argument that ‘Show Trials’ may elicit more evidence against a witness, which has allegedly happened in a few cases.

Former Queensland Police Commissioner Terry Lewis was convicted for corruption in 1991, and Politician Eddie Obeid likewise in New South Wales in 2021. Cases separated by thirty years and in different States are hardly a ringing endorsement for the benefits of ‘Show Trials’ or their usefulness in reducing corruption.

The CAA is not convinced that, although the additional evidence in these two matters may have been important, their subsequent convictions would have hinged on this information alone. We would expect a compelling case would have existed anyway; if not, it should have been with competent investigation.

No less of a luminary than Benjamin Franklin, a founding father of the United States in 1785, said,

” That it is better 100 guilty Persons should escape than that one innocent Person should suffer, is a Maxim that has been long and generally approved.”

Franklin was echoing Voltaire, pseudonym of François-Marie Arouet, recognised as one of the greatest French writers (circa)1749 who wrote.

“that generous Maxim, that ’tis much more Prudence to acquit two Persons, tho’ actually guilty, than to pass Sentence of Condemnation on one that is virtuous and innocent.”

And further, Sir William Blackstone, in his commentaries on the Laws of England in 1783, said,

“For the law holds that it is better that ten guilty persons escape than one innocent suffer.”

The numbers quoted by these luminaries are immaterial; the Maxim they promote is the key.

The argument for this Maxim is compelling and has stood the test of time, and should not be set aside.

The public examination of witnesses by Corruption Agencies contradicts this Maxim.

Otto Von Bismarck, a former Chancellor of the German Reich, was generally attributed with laying the foundation for the first and second world wars and expressed the opposing view.

“it is better that ten innocent men suffer than one guilty man escape.”

Proponents of the Public examinations tend to favour the Bismarck philosophy, and we are strongly inclined to the Franklin/Voltaire/Blackstone view.

If corruption (crime) is suspected, no matter who it is in the public employ, then the Police need to be the primary investigators.

If the Police need the support of coercive powers currently available to IBAC, a minor amendment to the Major Crime (Investigative Powers) Act 2004. This would allow Police, on the authority of the Supreme Court, to defer to the Public Examiner, who has and can exercise coercive powers; there is a compelling argument that corruption is a Major crime and should fall within the purview of the Public Examiner.

There will always be a need for an independent Authority to manage corruption involving Police. But such an authority, not saddled with general crimes committed by those on the public payroll, would be more cost-effective.

Victoria’s Parliamentary Integrity and Oversight Committee’s deliberations were motivated by the untimely death of a witness subjected to a ‘Show Trial’. Mistakes like this are completely unjustifiable under any circumstances.

That the Committee exposed that IBAC management could not explain the simple concept of what ‘unreasonable damage’ might be, is damming and highlights a need to consider if IBAC is fit for purpose.

The lack of tangible outcomes is another issue to be addressed. The very last thing we need is empire-building in this space – results would be more appropriate.