RULE, LETS THE CAT OUT OF THE BAG ON SLUG-GATE 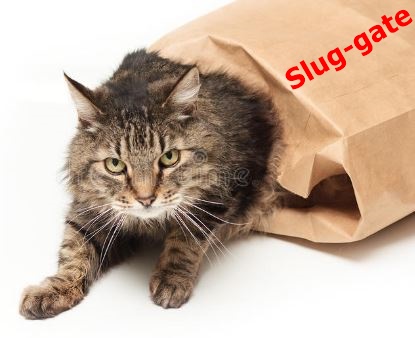 This is the most egregious and far-reaching corrupt enterprise to be uncovered in this State.

There will be many very nervous people in the Health Department, Police, Local Government, and a couple of politicians who will face awkward questions about corrupt behaviours. As will the Auditor General, the State financial watchdog, who will need to answer some confronting questions about his efficacy, as he was across the ‘Community Chef’ books showing the failures effectively from the start.

The big question is how did he not detect insolvency.

This is all about a meticulously contrived plan hatched to create a cash cow for recipients not yet revealed.

Simply set up a catering business with government funds in the aged care and hospital food supply chain. The owners of the enterprise ‘Community Chef’, local government, and the Health Department can also be the major customer base.

They also happen to be the industry’s regulators, so the few competitors in this specialised area would rapidly drop off.

The equivalent of having ‘Hungry Jacks’ regulate McDonald’s, what could go wrong? Especially if you disregard gross conflict of interest and criminal conspiracies.

The significant job losses by closing these businesses is an oxymoron to the rationale of establishing ‘Community Chef, to create jobs. The net effect was overall job losses in this sector, one of the most significant smoke and mirrors acts ever perpetrated on the Victorian public

The plan started to look shaky when not all the players in the catering field followed the script. Instead, their nemesis became ICooks, who steadfastly refused to acquiesce to the conspirator’s grand plan. And year after year, ‘Community Chef’ continued to need more cash injections than ever to keep afloat. A basket case enterprise of epic proportions.

The architects of the conspiracy, now with concern almost panic for the future of ‘Community Chef’, moved into arguably illegal actions to achieve their objectives to stave off insolvency, which was arguably evident and covered up for many years.

One of the strongest motivators for the conspirators was the technology that ICooks had developed.

Texture modified food is a technique of processing food, modifying the texture, and then presenting it in its original form. Designed to replace the vitamised muck that people unable to eat solid food have traditionally endured.

When the conspirators launched their offensive against ICooks, we believe it was no coincidence that I Cooks were well advanced in securing a series of multi-Million-dollar contracts for their technology locally and internationally.

The value of this business was heading towards the triple-figure million-dollar levels. Yet, all the contracts ready to complete, worth somewhere north of $20 million, were cancelled because of local government and State bureaucrats interventions. As a result, homegrown technology that was in demand by the world’s markets was lost.

If ICooks could be forced into liquidation, the conspirators could pick up the patents at a bargain price, and the future of the ‘Community Chef’ as a cash cow would be assured. ICooks never liquidated.

The ubiquitous and converted main prize in the game was lost to Community Chef.

‘Community Chef’ has now gone owing millions, absorbed with all its debts by the Health Department currently claiming under-resourcing for health failures in this State. Perhaps spending more wisely would help their current crisis.

The conspirator’s intelligence was a bit like Russia’s intel on Ukraine. They underestimated the resolve of their enemy. Ian Cook refused to quietly accede to the market pressure created by the conspirators. This forced the conspirators to resort to risky strategies, like slugs, to achieve their aims

Amongst ICooks supporters are two retired detectives who have worked pro bono for over two years, putting together volumes of intelligence and evidence in this case. Their dossier exposes conspiracies and a raft of other criminal activities.

The two detectives achieved what the responsible Government entities did not bother, or could not do, to see off this artifice called ‘Community Chef’ and sever the money pipeline that bled the company of millions.

The location of the other end of that pipeline is pretty evident to all involved in this matter. The detectives are now working on converting intelligence gathered into evidence.

The ex-detectives helping ICooks, have lost none of their skills. Although retired you can take police out of policing but not their loyalty to their oath, which is innate.

Slug-gate is heading inextricably and rapidly towards the ‘bring down’ of the perpetrators, their minions, and Kama for the victims.

The infamous Red Shirts Rorts, still being investigated (we think), pales into insignificance. The taxpayer was rorted for $388k, compared to the Slug-gate scandal, which is circa $50 million at a minimum—ultimately heading closer to $100m.

From the first briefing, the Community Advocacy Alliance (CAA) received the CAA formed the view that this was a profoundly serious criminal matter of epic proportions. Further briefings reinforced the initial evaluation.

The failures by responsible agencies are numerous, and the individuals are sure to be exposed.

At the top of the list must be the Auditor General’s Office, who was across the ‘Community Chef’ books but either did not understand what they were looking at, incompetence, or something else.

Not far behind is Victoria Police, who we suspect, given the average lack of knowledge within Policing of corporate operations and governance, did not recognise the issue’s magnitude. However, elements within VicPol who did know acted corruptly.

IBAC has also been very tardy. Given that their inability to investigate the matter was claimed to be manpower, the offer from the CAA of a number of former detectives to investigate on behalf of IBAC pro bono was rejected.

The Slug-gate artifice is a huge issue with tentacles reaching far and wide; this probably understates the reality.

Once the scabs are torn back, what will be revealed will be monumental, leading right to the door of the most powerful leaders in the land.

We strongly encourage Andrew Rule and others to continue to investigate and expose the treacherous conspirators and their criminal misdeeds.