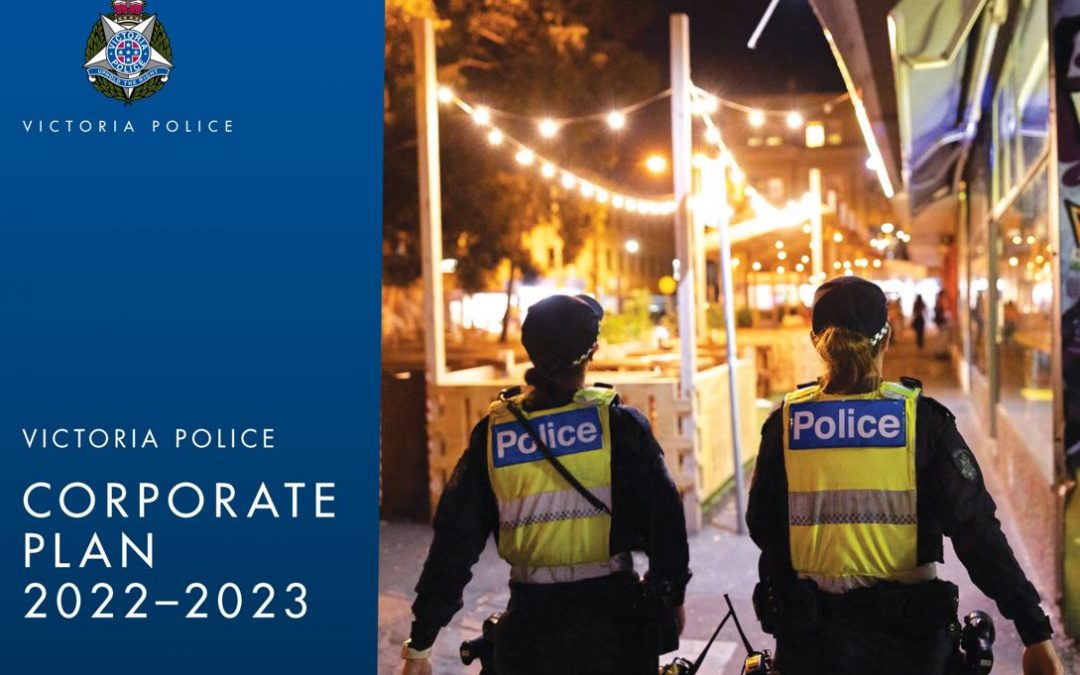 There is a lot to like about the Victoria Police Corporate Plan https://www.police.vic.gov.au/victoria-police-corporate-plan-2022-2023, and the community we suggest will be pleased with the directions the Force is taking.

The Force priorities, even in the order they are listed, would undoubtedly resonate positively with the community.

For all the excellent work in this Corporate Plan, there is, however, one glaring anomaly that strikes at and severely diminishes the value of this document; the lack of outcomes measurement.

How will the community, or for that matter the Force, know if the plan has worked?

That anomaly will be addressed as part of a further article on organisational management practices.

A failure of police administration’s past has seen confusion evolve with the Service delivery concept. Overlaying the Service delivery function with Service efficiency; two distinct and often diametrically opposed concepts that can constantly work against each other, have gone a long way to disconnecting police from the community.

You can not ring Victoria Police Headquarters per se.

The abandonment of this resource would clearly be Service efficiency at a substantial cost to Service delivery.

A clearer example from a CAA member of this failure is unlikely; we hope;

… on Monday, (5th Sep.) I (a Police veteran) telephoned the VicPol number 131 444, to find out a contact point for an acquaintance (who was aware of my previous experience in Fraud matters) who wanted to report a major fraud to the Fraud Squad, after he had tried and failed. All I got was a recorded message to either press 1 or 2. I pressed 1 and was told by a recorded message that my call would be answered in 40 minutes, YES – 40 minutes. I hung up.

This is a clear and dramatic failure of Service delivery and rates up there with the failures to deliver Freedom of Information (FIO) requests stretching out to nine months.

We strongly suspect the culprit is a management one – benchmarking and accountabilities would seem the obvious culprits and must be resolved before the alternative of simply throwing more resources at the problem, the current go-to option, which should never be done without the other drivers being examined.

We will have more to say on these and other management concepts in following articles because the problem is severe.

Addressing these apparent weaknesses will go a long way toward improving the performance of both Police operations and Police management from an output and welfare basis.

Service delivery, however, must be viewed from the user’s (the community) perspective, where Service efficiency is viewed from an organisation’s economic or resource perspective.

Another common fallacy is that an organisation assumes that the consumer knows how to navigate through a large organisation. This often flawed assumption is aggravated by accusing the failure or pushing responsibility to gain access to the user, a critical flaw.

Good communication is the lifeblood of policing, administratively and operationally, so placing barriers across communication channels is counterintuitive.

Private corporations and other public entities have suffered the same clash but are now a wake-up and are making huge improvements. The move from offshore call centres is but one example.

However, we hope that with Service delivery now a priority, we will see vast improvements in policing.

The measurement knowledge referred to earlier is an entitlement the community could reasonably expect, and any broad overarching global statistical response will not reasonably satisfy the public who want to know how the plan has worked in their community; not just the State or some region that makes no geographical sense to the general public.

There are also a number of parameters that the community would want and are entitled to know at a local level not serviced by the usual key factors like crime and road toll statistics.

The failure to provide this information feeds the community’s view of a lack of transparency and accountability of Victoria Police which is contrary to the intent of the Chief Commissioner.

How is it anticipated that community confidence in their police will grow if they don’t know how the Force is responding to their needs?

There may well be internal measuring that, for whatever reason, are not made public, which detracts from the plan’s strengths and feeds the perception of the siege mentality towards the community the organisation has developed.

We know the Chief Commissioner supports transparency and accountability, but it is not being practised when viewed externally, so we need to look at the cause.

The level achieved towards the nirvana of good community relations is directly proportionate to the effectiveness of Policing overall and visa-versa. One begets the other.

Equally and most critically, the higher the level of confidence the public has in the Force is directly correlated to the quality, frequency and strength of information flow from the public and voluntary compliance.

So, it is overwhelmingly evident that timely and open communication with the public is the key to the effectiveness of policing.

The other side of the coin is the intangibles, where competent management excels and lesser managers fail.

The intangibles like police attitude and enthusiasm to perform their duties are bolstered if they work in a positive community environment. Good communications from police drive that positive environment.