Police Veterans in Schools – we are away

The Police Veterans in Schools Program (PVISP) was launched recently at the Box Hill RSL. The Community Advocacy Alliance (CAA) initiative was launched by Rita Panahi of the Herald Sun and Sky Current Affairs to more than sixty guests.

The launch commenced with police veteran and current primary school teacher Peter Jarvis, the CAA education adviser, taking the first wave of volunteers back to the classroom to update them on what they may experience in the school and specific aspects of the PVISP curriculum.

Notably amongst the guests were three former Police Commissioners, three former Assistant Commissioners and a substantial number of police veterans representing all ranks displaying the new uniform tops for the project. They all had a common purpose, and that is a belief in proactive policing and the need to talk to children before they offend instead of waiting until they do.

The guests included politicians, local government representatives and corporate supporters and most importantly, many of the schools who had expressed interest in the program attended.

Former Chief Commissioner and Chairman of CAA, Kel Glare spoke on his experience and the importance of understanding the basic principles of policing, a concept that seems not to be understood by the current police administration.

He spoke of the simplicity of the concept and how he is amazed that the government has not stepped in on behalf of Victorians to rectify the policing imbalance as the consistent growth in juvenile crime is not being slowed by current strategies. 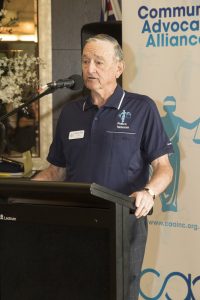 Kel also spoke of the importance to look over the borders, as every other police force in Australia has maintained a strong youth program policy and do not suffer the same crime rate growth as Victoria.

The Chief Commissioner has refused to support this initiative, and in a letter Kel received it was clear he did not understand the concept of proactive policing which is terribly disappointing as it is as fundamental to policing as keeping to the left when driving is to a motorist or should be.

The guests were then addressed by Julie Le Guen.  Julie is the Assistant Principal of Stevensville Primary School in St Albans.  She spoke of the concentration of various ethnic groups in the school with about eighty per cent of the children coming from families where english is not their first language.

Julie spoke of the dire need and importance for children to connect with police on a personal level and to that end, Stevensville looks forward to the PVISP.

Our guest of honour Rita Panahi spoke of the “No Brainer” of the PVISP program congratulating the veterans and others that have given their time to develop this initiative. 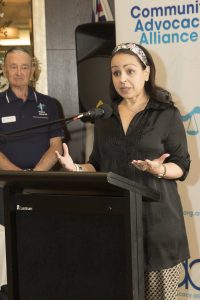 A parent herself she understood the importance of what CAA was doing.  She was astounded that the Chief Commissioner has refused to support this initiative and she would be investigating this issue in some detail.  Rita commented that “it just doesn’t seem right, the government should intervene to ensure support for this program” she said.

Veterans giving up their retirement is one thing but having to fund the program themselves is a community disgrace, and substantial credit must go to the CAA Board for their hard work to get the program to this stage.

With over twenty veteran volunteers and twelve schools involved, this initiative is already snowballing as word gets out with more volunteers and schools making contact regularly.

Rita then officially launched the PVISP. 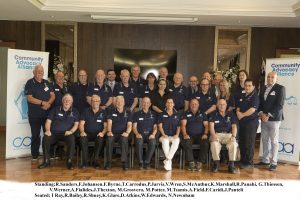