WHERE TO FROM HERE CHIEF PATTON? 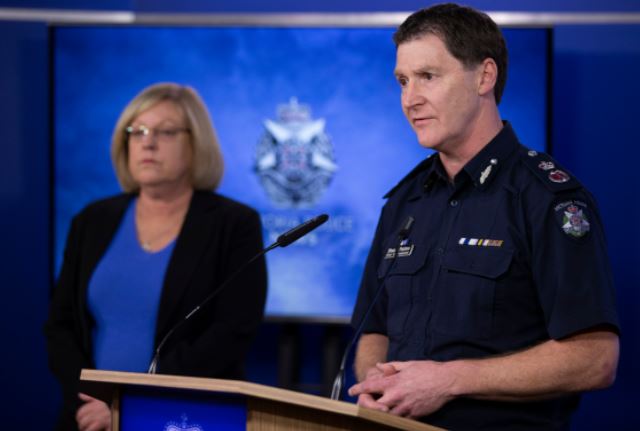 The Victoria Police and the Chief Commissioner have a habit of shooting themselves in the foot. With their latest effort, they have managed to shoot both feet.

Some of the baggage inherited from the reign of Chief Commissioner Ashton provided some initial cover for current Chief Shane Patton. He is well on his own now. Not only must he wear shortcomings of his own administration but failings and deficiencies of the previous regime.

The CAA provided support for Mr Patton and has been subjected to substantial criticism for that position, however, we are now concerned our faith was misplaced.

We had been contemplating the improved change in what we saw as positive approach by VicPol to demonstrations against the deportation of criminal detainees.

Our hesitation was the cause being pursued.

A cause of the extreme left of Politics, raised in our view doubts that this change was not an awakening by VicPol on how demonstrations should be managed but a change influenced because of who was demonstrating, a partisan political stand by VicPol.

The police response to civil unrest is bookended by the Black lives matter and the latest refugee demonstrations with the COVID response in between.

If the Government or the Chief Commissioner thought that the disquiet created during the COVID demonstrations will dissipate over the use of capsicum spray, bean bag rounds, riot shields, demonstrators thrown to the ground and many arrested, they have miscalculated badly, they have just poked the bear.

Any doubts as to the political status of VicPol have now been put beyond doubt by the inaction of the Chief Commissioner to the ranting unhinged behaviour of Lidia Thorpe, a member of Parliament and the Greens party.

Her tirade at the police, who showed amazing restraint, was inexcusable on any level but aggravated substantially because of her position as a sitting MP.

That Mr Patton did not immediately come to the defence of the Police members, and the Force to condemn Thorpe’s behaviour is inexcusable and any efforts now will not be considered as authentic, the moment has passed for Patton.

Other than a few police who have a similar political bent, the overwhelming majority of police will be feeling badly let down by their Chief Commissioner to a degree that may not be recoverable.

Equally culpable was the Police Minister Neville. She was conspicuously absent as was the Premier. Yet it was Premier Andrews who relied on those same Police to implement the draconian and unpopular COVID policies that police on the ground wore the brunt of, professionally and privately.

Policing is a thankless job, but when the community leadership collectively fail the Police on the frontline that is a damnable disgrace.

Chief Commissioner Patton now has to be careful that he is not faced with a ’vote of no confidence’ from the Police rank and file, the ones getting abused, assaulted and spat on, as police anger is palpable.

It would be a grave error to assume that will not happen. Pervious Chiefs Reg Jackson and Mick Miller faced a ‘vote of no confidence’ so precedents do exist for such an extraordinary move by Police rank and file. This matter is much more sensitive and coming as it does hot on the heels of the way the COVID Police response was handled. This latest may be the catalyst for discontent to boil over.

As this latest demonstration confirms that the variable responses by  Police on the ground are dictated by their command, not the individual police.

Not to be forgotten this misstep comes right on top of the debacle and mishandling of the Sergeant Bruno Staffieri matter. I this matter Sergeant was charged with disciplinary offences and the perpetrator of the abuse of the Chief Commissioners’ own Inclusion Policy was his own deputy. Deputy commissioner Paterson thus far has escaped accountability and the Chief has remained mute.

That Deputy is the same officer who as an Assistant Commissioner appeared before the Royal Commission into Police Informants. At that appearance Mr Paterson admitted on oath that he had failed to tell the Royal Commission for six months that the prime subject of the Commission , barrister Nicola Gobbo had been previously registered as a police informer in 1995.

This action raises the question of a contempt of the Commission. Why no disciplinary action was taken against Paterson for this egregious failure is beyond comprehension when there is no doubt a lower rank would have faced scrutiny without hesitation.

Patton promoted Paterson to Deputy knowing his embarrassing failure before the Royal Commission and the potential for him to face contempt charges.

Getting promoted after misleading a Royal Commission, how does that work?

The relevance of these assorted issues brings into sharp relief the competence of the Chief Commissioner as it can be fairly argued he does not support his rank and file, provides cover for the executive, his lack of ability to select competent people for promotion and his relationship with the Government. Raising the sceptre of promotion by allegiances to Political doctrines rather than competency.

Victoria Police is without doubt politicised and that is not good for the community irrespective of any political views, for that sin we are all victims.

The classic police idiom applies to the Chief Commissioner – Your move Sergeant.