WE KNEW YOU COULD DO IT. 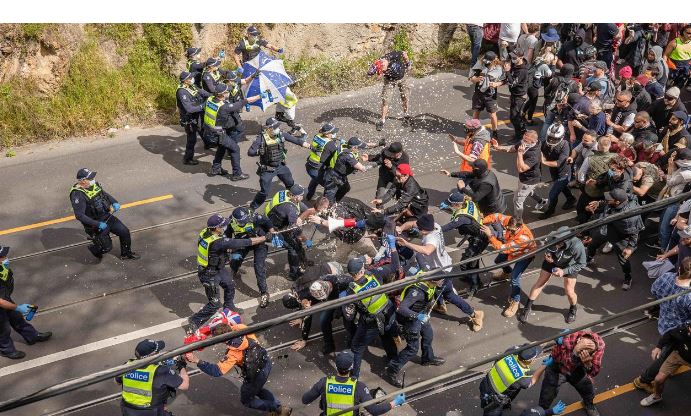 As we all watched the response of Police to COVID demonstrations, close observers detected an uncomfortable reality was dawning. Is this the new norm?  The community was initially split on the mixed messages that the demonstrators were sending and the Politicians were promoting.

A high proportion of the community had volunteered to be vaccinated, probably encouraged by the fear campaign. However, they made their own decisions and many vaccinated people viewed the anti-vaxers as selfish individuals. People who were willing to put us all at risk. A concept embraced by many Politicians.

As the restrictions increased from what seemed reasonable to what can now be seen as draconian, the mood started to shift towards concern for our freedoms.

Today there is a different community mindset with anger entrenched against the removal of our liberties. The realisation they can be trashed so effortlessly by a fear campaign, Government incompetence or twisted ideology is frightening.   In light of what we now know, it is incumbent on us to keep up pressure on Government to ensure the balance of liberty versus safety is not swayed by Government ideology and fear-mongering.

A basic tenet of the Office of Constable of Police is discretion and the binding of police to action must only be so in serious situations.

During COVID, the issue of the politicisation of Police has been elevated substantially. How was it that our police force, once respected as the best in the land, become so apparently politicised?

Denials of politicisation from those in authority abound, raising scepticism in the community fuelled by the failure to release the medical advice relied on to justify police responses.

What we do not know is what the objectives of the police response were.

Like all these things, time will eventually expose the truth, and that process has started.

On the same day as Vladimir Putin’s legacy, the Crimean Bridge, was attacked, there was a demonstration in Melbourne led by Bernie Finn MP that will blow up the denials of politicisation of Police and damage our leader’s legacy.

Bernie Finn, a long-serving politician, exposed the truth when he posted the following

Victoria Police, under the command of Snr Sgt Katherine Mitchell, did a superb job of protecting marchers and avoiding the violence pro-abortionists were intent on. Even when I was attacked, Police acted quickly to remove the threat.

The boys and girls in blue did a magnificent job, and I thank and congratulate them for their great work.

The three cheers at the end was much deserved!”

The significance of these comments, that we take as genuine on face value, should not be underestimated.

The date of this demonstration was the 8th of October. However, the Emergency Declarations that VicPol was operating under during the COVID demonstrations did not expire until 11.59 pm on October 12, 4 days later.

So, who pushed the button that VicPol would revert to Policing demonstrations in the non-confrontational approach of the pre-COVID era? What was the medical advice that VicPol was operating under on the 8th?

As we have experienced, every pronouncement on COVID restrictions or otherwise are time and date stamped and inflexible, but something may have changed.

Was it the Police or the Government politics that swung this change? Who authorised the ‘softening’ of the Emergency Declaration?

When viewing the footage of the COVID Demonstrations, it has been a puzzle. When assessing the response, we ask:

And yet, on the 8th of October, we have VicPol behaving and responding in a disciplined, carefully planned professional operation intent on maintaining the peace and the right of people to exercise their democratic right of freedom of assembly.

The Emergency declaration was still in force.

As Bernie Finn has indicated, Senior Sergeant Katherine Mitchell did an excellent job, and full credit to her for maintaining proper command and control, but behind the good Senior Sergeant, there is an extensive operational command structure, which is where it gets interesting.

We have suspected for some time that there have been political hawks in the Police Senior command. These people apparently enforcing the will of the Government to use violence. Who was responsible and what was the influence of senior command in the way protests were handled?   It may be only a Royal Commission is the only way this and the other questions will be answered.

This latest demonstration hints that the hawks may have been moved on within the Police organisation, but in our view, that is unsatisfactory as they should be held to public account and not permitted to slink off into anonymity not held to account for their actions.

As we look to the future, we can see hope with the efforts of Senior Sergeant Mitchell and her subordinate team.

We would want to be assured that fail-safes are installed in the process that will avoid the repetition of the hawks or political apparatchiks overtaking responsible Policing.

Independent command and control principles must be guaranteed for the future.

It would seem that only a Royal Commission can provide the community with certainty in the future.

When done correctly, and we assume without political influences, VicPol is very good at what it does.

Although our faith in Victoria Police was tested, we knew they could do it.