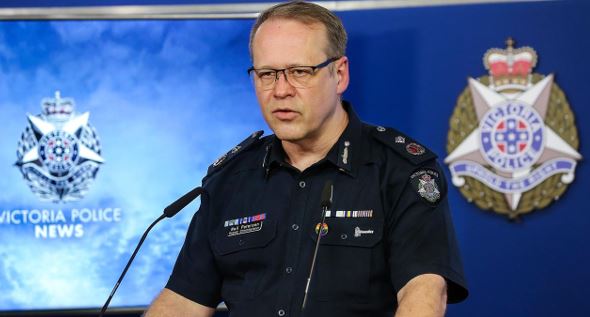 As reported in the Herald Sun on the 8th of December 2022, Deputy Commissioner Neil Paterson allegedly apologised for an incident involving a Red Cross blood donation worker who was left deeply upset by an encounter with him. It is unclear to whom he apologised.

Simply put, this incident should never have occurred, and we doubt a remote apology will right the wrong. There is no indication that the Red Cross worker has accepted the apology, From the report, we would understand why she may not.

This incident occurred in a café area at Police headquarters where the Red Cross woman approached Paterson. She was there recruiting blood donors, doing her job.

Paterson berated the woman in an area where there would have been large volumes of police employees. As a Deputy Commissioner in Police Headquarters, the imbalance in the encounter was dramatic and for all to see.

Berating a worker rather than taking his concerns to Red Cross in a private capacity, and there are many avenues open to him to do that, is like confronting and berating a junior constable in the suburbs for the behaviour of VicPol during the Gobbo affair.

Mr Paterson has form in this area, having previously achieved comprehensive media coverage for his attack on a Police Sergeant nearing retirement because his religious beliefs oppose homosexuality.

The similarity in his previously exposed incident was also a substantial power imbalance between a Deputy Commissioner and a Sergeant.

Paterson is not employed to peddle his personal agenda. When he puts on his ‘Salute Blue’ suit, he becomes a servant of the Chief Commissioner and an example for other Police to emulate.

It is trite to say that Police, especially senior Police, must not allow bullying. With that, it is also obvious that they should not be bullies. The incidents, while against different people, appear to indicate bullying behaviours. CAA is not saying Paterson is a bully. This is a matter for others to determine, but CAA does say that the behaviours alleged reflect poorly on Paterson and Victoria Police

This incident has broader implications for Victoria Police and the Chief Commissioner.

He was putting the Chief Commissioner in an unenviable position where he is conflicted between supporting one of his most senior executives and his responsibility to maintain discipline and good order in Victoria Police.

Expressing support for Paterson could send a message to all Police that you can use your uniform to pursue personal values with impunity. And you can bet it would end badly if it took off.

This issue will not go away, particularly if other Police are disciplined for inappropriate comments. Their defence will be obvious.

The Chief Commissioner must formally admonish Paterson. This needs to be public, to rebuild the structural damage to VicPol Paterson has created.

Paterson’s behaviour is contrary to the neutrality expected of  Police. The CAA believes this behaviour brings ‘the Force into disrepute’ and further feeds the community’s perceptions of the lack of impartiality by the Police, magnified substantially because of his rank.

Would this behaviouir be toleated by Poilce Command for a more junior ranked police memeber.

The way the laws currently stand, only IBAC can take a complaint against any Police Commissioner, and CAA has little confidence they would do anything, making police executives seemingly beyond reproach, creating a protected species.

The Chief Commissioner is, in reality, the last bastion of the enforcement of proper standards. We invite him, as a man of integrity, to publicly rebuke Paterson for his obviously poor behaviour.

We also call on the Government to amend legislation to empower the Chief Commissioner to instigate and investigate complaints against his Senior Officers if required, even if that investigation is overseen by IBAC.